Whale watching in Cabo comes at a particularly festive time. Officially, the Cabo whale watching season starts in December and runs until the middle of April when festivals and activities in Los Cabos are at their peak and the warm weather brings visitors from the higher latitudes down to the delicious breezes along the Tropic of Cancer.

The thousands of gray whales and humpbacks migrating from frigid Arctic waters in the north Pacific can be spotted as early as Thanksgiving as guests sit down to a feast in their Elegant Mexico villa and marvel at the panorama, suddenly spotting the flume of a humpback in serious play amid the warm waters of the Sea of Cortez. The 6,000-mile migration happens every year at this time and becomes a stunning spectacle during the Christmas holidays when calving season is in full force and the pods of more than half a dozen species of whales can be watched by villa guests right from their patios overlooking the pool and the sea beyond. 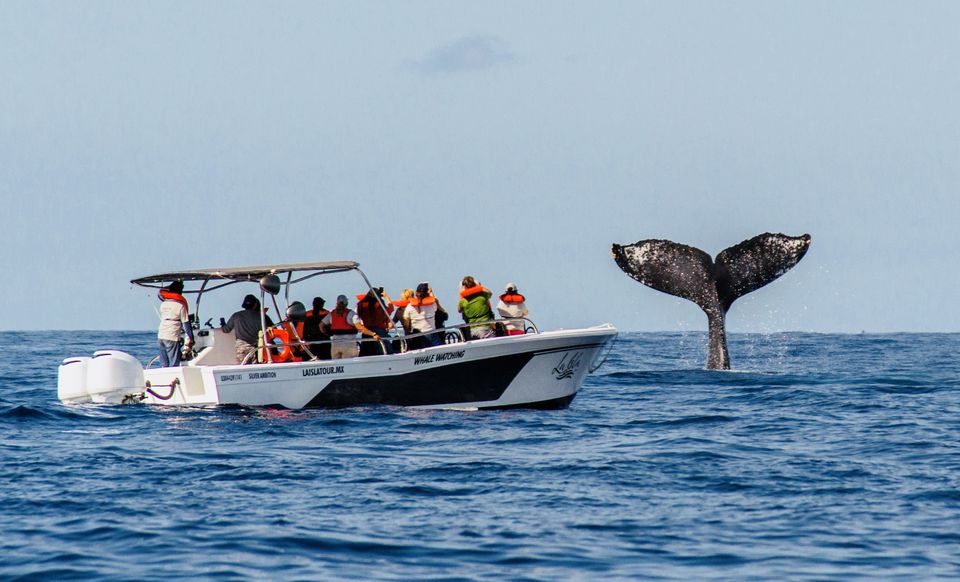 In fact, whale watching has become one of the most popular tourist attractions in the Baja, extending up and down the coast and as far north as Loreto. The spectacle is one for kids and adults alike, and can be enhanced with some up close and personal whale adventures through InCabo. The Cabo adventure company specializes in private excursions and tailor-made day trips, and those extend whale chasing adventures.

For those who may take a more spontaneous approach to activities in Los Cabos, a sudden yen for whale watching in Cabo San Lucas may be serviced by visiting the marina in Cabo San Lucas where there may be all manner of kiosks and storefronts offering whale watching tours, among other activities, that can be accommodated right from the plaza. Tours of choice may mean an intimate tour with only a few friends and family onboard or it can mean a larger boat and a shared the experience with other travelers.

Whale watching in Los Cabos means immersing in a veritable aquarium of these majestic sea mammals. Expect to see blue, sperm, pilot, fin, humpback, and Bryde’s throughout the Sea of Cortez alone, but there are humpbacks and grays and orcas as well feeding on the abundant krill and sea life in an attempt to get plump and right for the laborious trip north in spring.

Many of these cetaceans are behemoth in size. For instance, blue whale species marks the largest animal in the world reaching up to 100 feet in length and weighing in at 190 tons. Fortunately for Cabo whale chasers, the currents swirling through the Sea of Cortez provide plenty of masses of krill, which happens to be the blue whale’s favorite meal. In fact, these creatures will easily eat four tons of krill per day in the sea’s calm waters., The Sea of Cortez is actually a UNESCO World Heritage Site and as one of the most diverse seas on earth it is home to nearly 900 species of fish and the widest variety of whales and dolphins one could hope to see.

Other whales on the roster include gentle gray whales. The lumbering mammal is not the largest of the pack, nor the fastest, but may be the friendliest. On some tours, guests may be able to get so close to these mammals as they breed in the warm, shallow waters, that they can touch and pet them.

On the speedier side of the species are the Fin whales, which can dart through the depths at speeds of up to 25 miles per hour. Sei Whales, too, are known for their speedy sprints that have earned them the moniker, cheetah of the sea. These animals are endangered, however, and with their dwindled numbers, sightings are not likely.

By contrast, however, humpback whales in Baja should be plentiful during whale season. Members of the North Eastern Pacific Population estimated numbers run as high as 18,000 whales and growing at a rate of between 6-7 percent. While common numbers, the humpback is a vulnerable species and threatened by all the intrusions of man – from sound, marine and environmental pollution to the nets and plastic that coat the oceans. The humpback is the singing whale and is considered to be the most energetic of the large whales with its spectacular shows of breaching and flipping and arching suddenly out of still waters.

It was the humpbacks that were most hunted when such practices were in full swing. Some 250,000 humpbacks were killed in those times, but the current concerns around climate change and pollution provide much greater threats.

Cabo whale enthusiasts may also see Bryde’s whales, which feed on sardines and herring in curious demonstrations of hunting techniques. Sperm whales, too, may be sighted, although they are known for hunting in the depths and only skim the surface to rest. Then there are the Minke whales that are petite creatures of up to 25-feet in length and one of the most commen whale species worldwide.

And, of course, there are Orcas – otherwise known as killer whales. However Orcas are technically a dolphin species and one of the most feared predators of the sea. Smart and striking in their black and while markings, they roam the seas seeking delectable sea lions, tasty turtles and nourishing squid for their rapacious feedings. They travel in small pods and can be seen arcing through the waters in groups. Late in the season toward summer the site of Orcas encountering migrating mobula rays in the Sea of Cortez is one of the rare and most riveting natural spectacles to behold in Baja.

For those who prefer to enjoy whale sightings from the comfort of their pool lounger or private bedroom patio, an Oceanview Villa through Elegant Mexico, such as Casa Fryzer, or an Elegant Mexico Beachfront Villa, such as Villa 322 or Villa 461 puts all the fun and awe at front and center stage, margarita in hand.

And for those who would rather swim with whale sharks rather than chase breaching whales, Elegant Mexico offers the ultimate Whale Shark Encounter through InCabo, allowing guests to swim and snorkel alongside these gentle giants. Whale sharks are the largest fish in the sea, averaging 40 feet long and weighing 20 tons. They can be found in large numbers in certain parts of the Sea of Cortez from October to May.

Elegant Mexico offers guests the opportunity for close encounters with this protected endangered species led by a certified naturalist guide. This private excursion takes place in the protected area of El Mogote, La Paz – one of the world’s most biodiverse locations. Rates run $1,375 for two guests (additional guests at $150 each), plus tax. Book through Elegant Mexico reservations.