To swim with whale sharks may sound intimidating. And, indeed, it is worthy of at least a T-shirt at the end of a dive to proclaim a passing a fear hurdle, if not announcing a bragworthy experience. They are, in fact and with the capability of growing to lengths of up to 60 feet, the largest fish in the ocean these days. 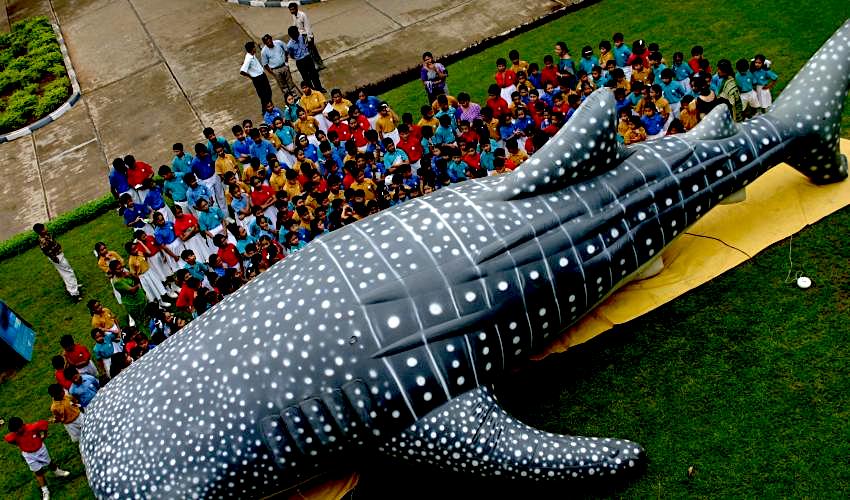 So, a day of swimming with a pod of whale sharks will be a day like no other. And travelers need not cross the oceans to Papua New Guinea nor Indonesia or even the Indian Ocean coast of Africa to find them. The shores of the eastern Baja will do the trick with families of Rhincodon Typus inhabiting the warm waters of the Sea of Cortez off La Paz – an easy 90-120 minutes by car from Los Cabos.

For those visiting Los Cabos and willing to leave their cushy villas for a day of adventure, they find whale sharks in these warm waters just about all year. But if you are one of these adventurers in hot pursuit, you will want to go in the coolest months between November and April, when the gathering is of these behemoths is at its highest. And the best part is the safe swimming to be done with these gentle giants. Whale sharks feed on plankton and do not possess sharp and dangerous teeth, although they do have a bunch of tiny teeth for filtering their food. The worse that could happen is perhaps the huge smooshy fish kiss you might get if you pass too close. These are not great white shark with an interest in sensing you and eating you. They are not even like many dolphins or sea lions swimming in the Sea of Cortez with a keen curiosity and an interest in playing. Rather, these sharks could care less about you and are only on the prowl for plankton and krill. Their mouths are bigger than their bite as even though their gaping maws could easily fit a human body, there is nowhere to go as their throats are barely larger than a small fist. 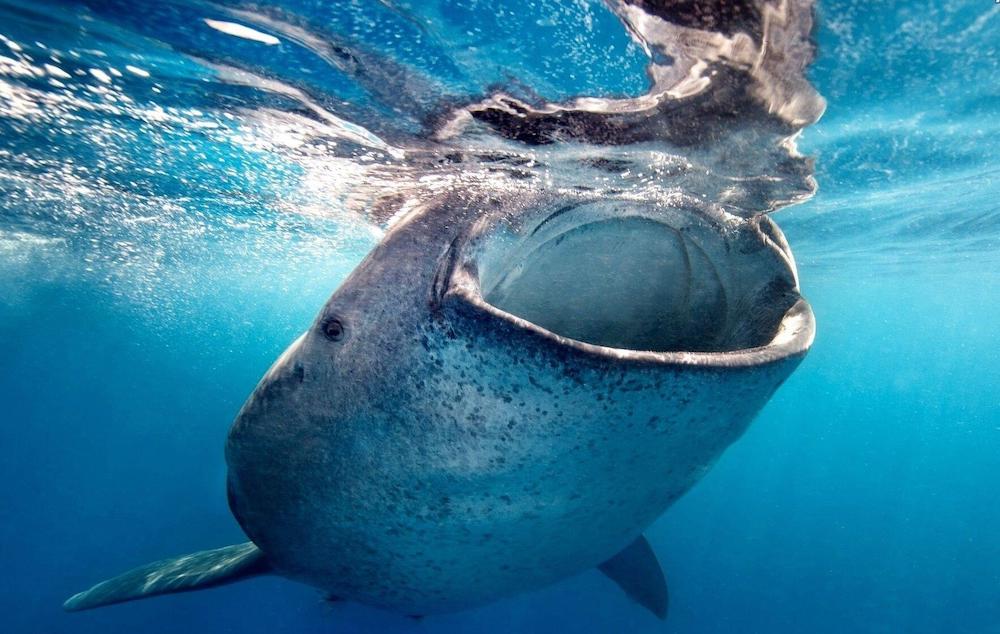 And, in fact, the smells humans bring often repel these precious creatures. The paba and chemicals from SPF lotions, hair products and other coverings actually hurt the whale shark, making their eyes sting causing an elusive behavior as they down to cleaner waters to get away from the scents.

With all the seeming friendliness of this legendary fish, naturally touching or petting a whale shark is ill advised. A powerful tail can whip the curious snorkeler from behind and do serious damage. Your guide will likely advise a safe three-foot distance from the head and a good ten-foot space from the tail, suggesting swimming fast to stay ahead of the massive fish rather than dangling beside or behind it. 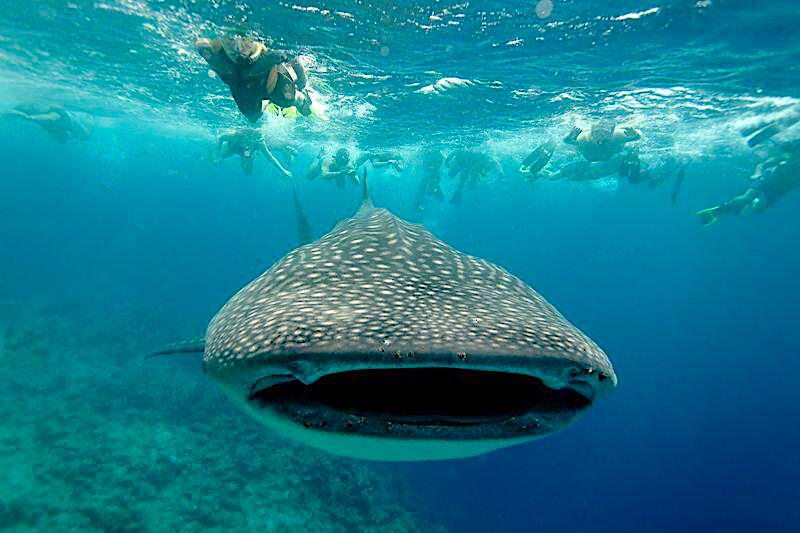 In Los Cabos, the whale shark’s swimming pool is the Sea of Cortez. It is often referred to as the Aquarium of the World, as originally described by Jacques Cousteau. It is actually a marginal sea attached to the greater Pacific Ocean with a sizeable coastline running for 2,500 miles and a total surface area of some 62,000 square miles.

Find the Sea of Cortez off the eastern arm of Baja California and touching the Mexican mainland. It is easily one of the premier diving sites on the planet and its protected in its beauty as a UNESCO World Heritage Site.

Other than whale sharks and whales, the calm inland sea is a living museum of marine life as diverse and spectacular as any on Earth, with more than 5,000 species of micro-invertebrates. On the other end of the scale find some of the planet’s largest sea creatures: humpback whales, California gray and blue whales, killer whales, manta rays, leatherback sea turtles, Humboldt squids, bottlenose dolphins and the quickly vanishing vaquita, the world’s smallest porpoise.

The Sea of Cortez also harbors more than 900 islands that mostly serve as nesting spots for all manner of seabirds, with hatching blue-footed boobies making a visitor favorite among the sights. Swimming with curious and playful sea lions may come as a bonus adventure to those on a shark quest.

Los Cabos offers several tour companies and outfitters ready to take on the cause of ferrying guests from Los Cabos to La Paz and then heading for whale shark swimming territory.

The Los Cabos official website, Visitloscabos.com, lists a few of these. Price per person can be as low as $60 and as high as $260 depending on what’s included in the adventure. For instance, Cabo-Adventures offers an eight-hour day with these lumbering marvels that includes snorkel equipment, wetsuit and towels, bottled water, a light breakfast and full “Baja style” lunch, fresh juices and flavored waters, professional bilingual guides and round trip transportation in an air-conditioned van from Los Cabos to La Paz. Currently, the rate is currently discounted to $174 per person. Private tours are also available.

Amstar offers these tours for $80 person using a catamaran on the sea of Cortez with drinks and music onboard. Wetsuits and snorkel gear are supplied and guests can jump in the water once the whale-sized fish are spotted. The trip includes transportation from Los Cabos to La Paz with a stop in the art town of Todos Santos for breakfast and a stop for independent lunch explorations and shopping in La Paz, plus water, sodas and the help of certified guides.

Once you swim with a whale shark you’ll want to help ensure their survival. The Whale Shark Project in Los Cabos is your answer to that as scientists working to track whale sharks with satellite tags and monitor their safety and protect their habitat.